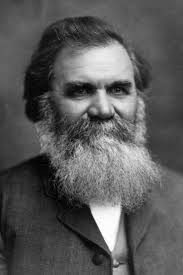 This guide focuses on the life and works of D.D. Palmer. You will find resources which are about D.D. Palmer and works authored by him, whether that be journals or books. Also, D.D. Palmer's background in magnetic healing and the first adjustment are highlighted. The guide is divided into the following pages:

Daniel David Palmer was born in Pickering, Ontario, to parents Katherine McVay and Thomas Palmer, on March 7, 1845. He moved to the United States in 1865 and took up magnetic healing in Davenport, Iowa around 1880. His office was located in the Ryan Building on Brady St., during 1895, when he cured Harvey Lillard, an African American janitor with impaired hearing by adjusting the misalignment in his spine.

D.D. Palmer developed the theory that the misalignment of the spine was an underlying cause of all "dis-ease". He developed a new discipline called Chiropractic and opened the Palmer School of Chiropractic in Davenport, Iowa, in order to teach his Chiropractic techniques to others. After his incarceration, he passed on the school to his son B.J. Palmer in 1906 and moved west to open new chiropractic schools in Oklahoma, California, and Oregon. Palmer died in Los Angeles of typhoid fever in 1913.