This guide focuses on the World of Chiropractic Radio Station. 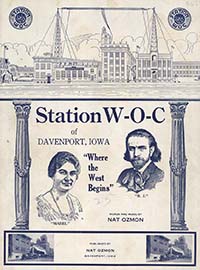 Station W-O-C of Davenport, Iowa. Words and music by Nat Ozmon (1923). Original sheet music can be viewed in the Special Collections and Archives.

B.J. Palmer purchased the radio station in March 1922, and became part of the Palmer School campus.The station increased its range with the installation of a 500-watt transmitter.

There were reports that international listeners could hear WOC. Programming included local and national news, weather reports, musical shows and educational lectures, many about chiropractic. B.J. Palmer used the radio station to reach out to the community, promoting the ideals of chiropractic.

WOC is best known as being the first commercially licensed radio station west of the Mississippi and for its famous employee, Ronald Reagan, hired in 1932 as a sports announcer.

WOC became WOC-TV and began television broadcasts on October 31, 1949. The Palmers owned the WOC broadcasting station for over 70 years. 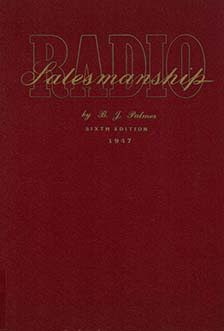 B.J. Palmer's Radio Salesmanship, first published in 1942 is a guide on how to present yourself on the radio and how to write good scripts. Chapter titles include, "Kidding the Other Fellow", "Things Which Annoy Listeners" and "Keep 'em On."

View a digitized version in our digital collection.